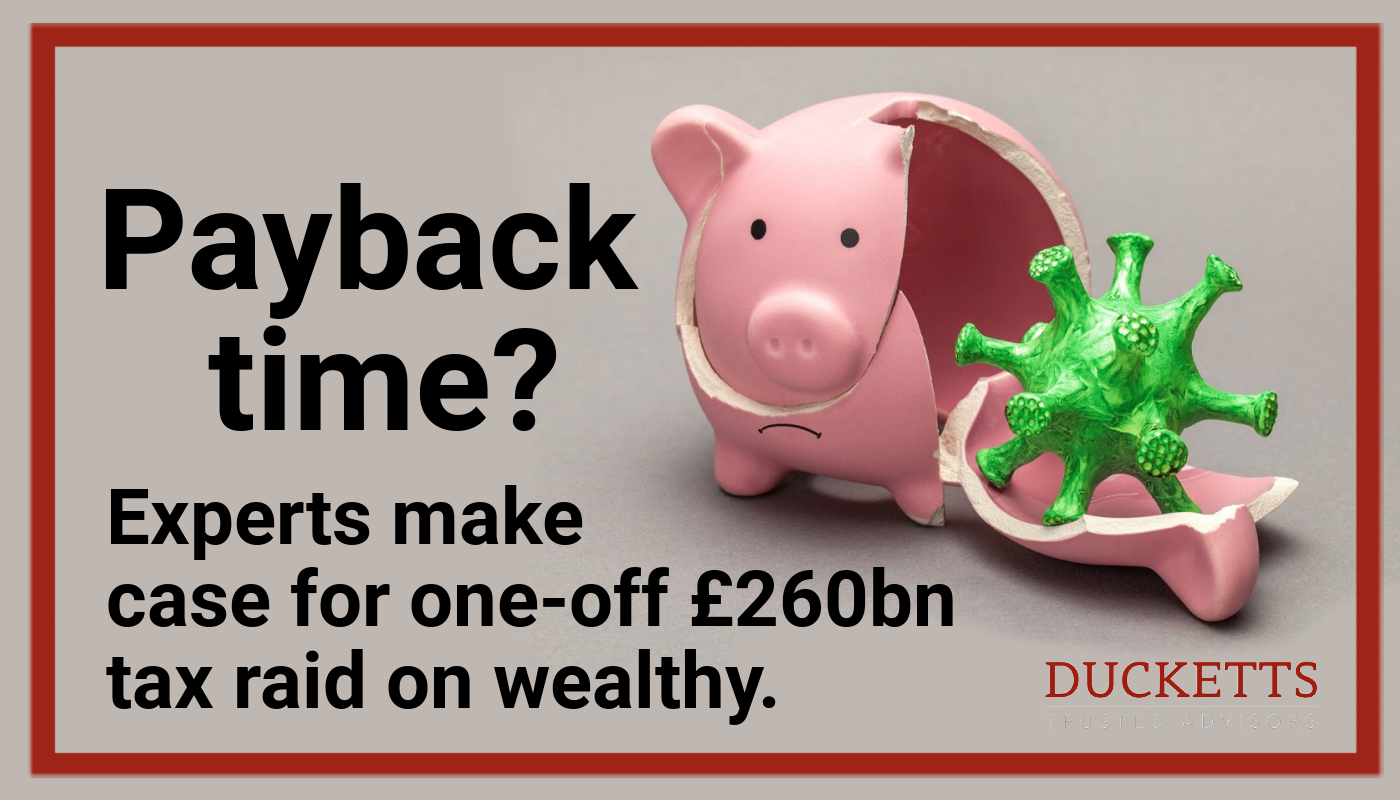 Borrowing to fund the pandemic response has been unprecedented. So, how are we going to pay it back?

A team of experts has recommended the Treasury help pay for the coronavirus crisis through a one-off £260bn tax raid on the wealthiest households.

The ‘Wealth Tax Commission’ is made up of a group of academics and tax professionals led by Arun Advani of Warwick University, Andy Summers of LSE and the barrister Emma Chamberlain, OBE. This group argued such a move was preferable to any widespread tax rises and spending cuts as they would further hurt many of those worst affected by the COVID 19.  Dr Arun Advani said: "We're often told that the only way to raise serious tax revenue is from income tax, national insurance contributions, or VAT. This simply isn't the case, so it is a political choice where to get the money from, if and when there are tax rises."

Emma Chamberlain, adds: "The trouble is that our current way of taxing the wealthy is far too complicated leading to avoidance and resentment. We need a better way forward."

However, CEO of tax and advisory firm Blick Rothenberg Nimesh Shah warned that any such raid risked tipping some into debt. "When wealth taxes have been discussed in the past, it was expected that certain assets such as the main home and pensions would be excluded, but the Wealth Tax Commission argues that this should not be the case. This could push thousands of households who may be asset but not cash-rich, into debt. A family owning a detached house in Southern England with a modest pension and ISA savings could easily be caught."

Chancellor Rishi Sunak has signalled action in the years ahead to tackle the deficit amid pressure to avoid a new round of austerity that followed the financial crisis.

Any wealth tax he authorised would be likely to hit his own pockets and those of his wife Akshata Murthy, the daughter of Infosys co-founder NR Narayana Murthy (who’s fortune is reportedly larger than the Queen's).

The body, which has examined the issue since the spring, determined it was clear that financial inequality had grown this year as many of the lowest-paid were hit by lockdowns while professionals and managers were largely able to work from home.

The Commission published its final report on the 9th of December where it made the case for a threshold-based charge against all assets of UK residents and non-doms, including pensions and homes, but minus debts such as mortgages.

The Commission suggested setting a threshold of £1m per household  (assuming two individuals with £500,000 each) and a rate of 1% per year on wealth above the threshold. This one-off tax, payable in instalments, would raise £260bn over five years.

"This is equivalent to raising VAT by 6p or the basic rate of income tax by 9p for the same period," the report said.

The Commission also said a more targeted approach could raise £80bn over five years if the threshold for the 1% rate was applied only to those with assets above £4m.

A Treasury spokesperson said in response to the commission's report: "Our priority right now is supporting jobs and the economy, and believe that getting people back to work, encouraging and incentivising businesses to take on new employees and new apprenticeships, ultimately creates the wealth that funds our public services.

"We're committed to a fair and efficient tax system in which those with the most contribute the most. Our progressive tax system means the top 1% of income taxpayers are projected to pay over 29% of all income tax, and the top 5% over 50% of all income tax in 2019-20. We've also taken steps to ensure the wealthy pay their fair share, reforming the taxation of dividends, pensions and business disposals to make the tax system fairer and more sustainable."

If you're concerned about how this may impact you or you would like to discuss financial planning with one of our team, call us on 01432 370 572